Round The World Food Bracket 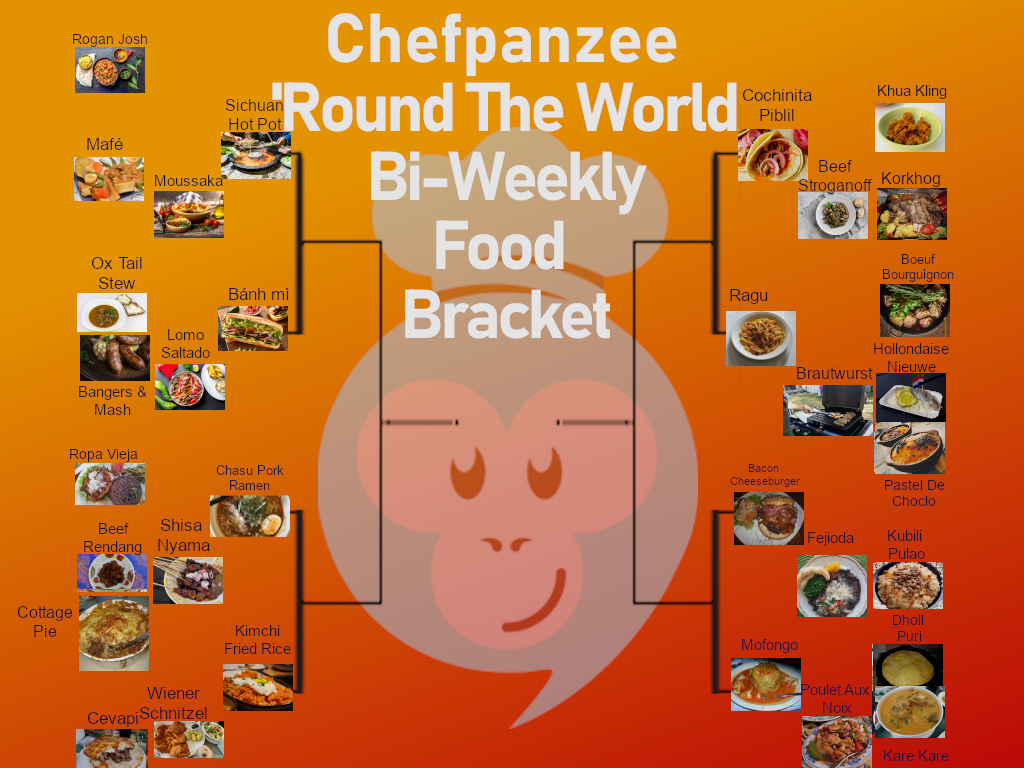 The Chefpanzee ‘Round the World food bracket continues today with our next 8 competitors! 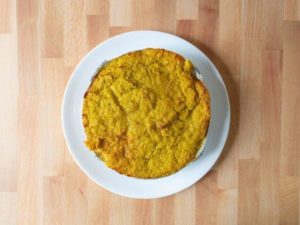 This is a South American dish based on sweetcorn or “choclo.” It is also similar to pastel de elote, found in Mexican cuisine, and to the English corn pudding. The filling usually contains ground beef, chicken, raisins, black olives, onions or slices of hard boiled egg. 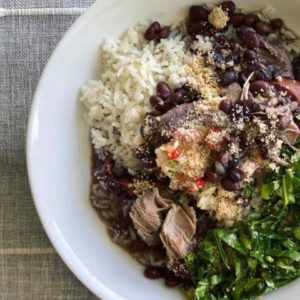 Feijoada is a stew of beans with beef and pork. It is commonly prepared in Portugal, Brazil, Angola, and many other countries, including Macau where it is also considered a national dish. The recipe differs slightly from one country to another but the basic ingredients of feijoada are beans with fresh pork or beef. 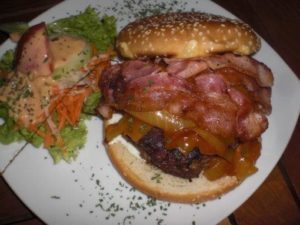 Adding cheese to a hamburger became popular around the late-1920s to mid-1930s. Though no one is exactly sure who the first to craft this delicious staple, adding bacon seemed like a logical next choice. The savory crunch and flavor of a bacon cheeseburger is unmistakable, and a true “American” classic. 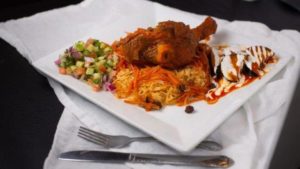 Also spelled qabuli palaw or qabili palaw is a variety of pilaf[1] made in Afghanistan, Uzbekistan and Tajikistan.[2] It consists of steamed rice mixed with raisins, carrots, and beef or lamb. There exist many different versions depending on regional ingredients including variations with onion, saffron, pistachio, and more. 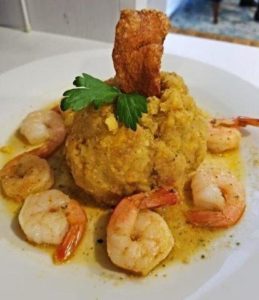 Mofongo is a Puerto Rican dish with fried plantains as its main ingredient. Plantains are picked green and fried, then mashed with salt, garlic, broth, and olive oil in a wooden pilón mortar and pestle. The goal is to produce a tight ball of mashed plantains that will absorb the attending condiments and have either pork cracklings (chicharrón) or bits of bacon inside. It is traditionally served with fried meat and chicken broth soup. 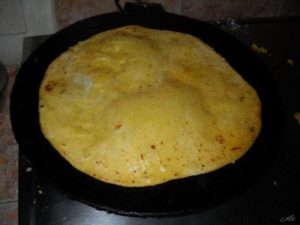 This dish is a deep-fat fried bread made from unleavened whole-wheat flour that originated in India. It is eaten for breakfast or as a snack or light meal and is usually served with a savory curry or bhaji, as in puri bhaji, but may also be eaten with sweet dishes. They are also commonly served as breakfast and snacks, and It is also served at special or ceremonial functions. 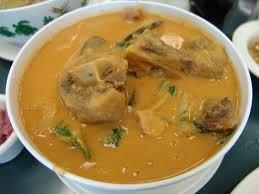 Kare-kare is a Philippine stew complemented with a thick savory peanut sauce. It is made from a variation base of stewed oxtail, pork hocks, calves feet, pig feet, beef stew meat, and occasionally offal or tripe. Kare-kare can also be made with seafood or vegetables, The stew is flavored with ground roasted peanuts or peanut butter, onions, and garlic. It is colored with annatto and can be thickened with toasted or plain ground rice.[1][2] 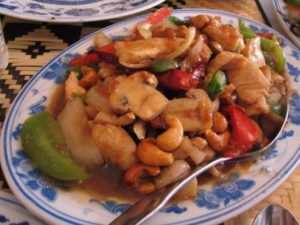 Haitian Another regional dish called poul ak nwa (poulet aux noix de cajou), which is chicken with cashew nuts), is from the north of the country, in the area around Cap-Haïtien. Spiced chicken, raw cashews. 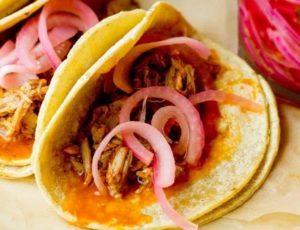 This dish, also known as puerco pibil or cochinita con achiote, is a traditional Mexican slow-roasted pork dish from the Yucatán Peninsula. Traditional preparation of this dish consists of marinating it in a strongly acidic citrus juice, and seasoning it with annatto seed which gives it its signature deep burnt orange color. It is then roasted in a banana leaf to ensure the meat stays juicy and tender. 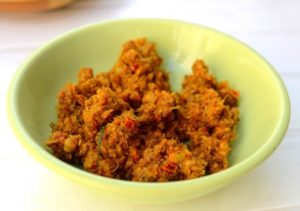 This spicy Thai curry is prepared with an assortment of herbs and spices including chilli pepper, lemon grass, garlic, turmeric, galangal, salt, and shrimp paste. Pork, chicken, and beef are interchangeable in this dish, but is usually cooked with kaffir lime and curry paste. 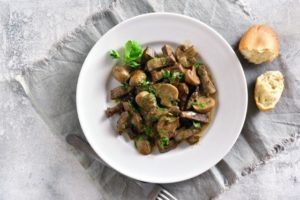 This dish, named after the powerful and influential and powerful Stroganov family, originates from Russia. The first known recipe dates back to 1871, and was simply a mix of floured beef cubes, prepared with mustard, broth, and sour cream. Though the dish varies greatly in preparation around the world, the common themes of modern stroganoff often include mushrooms, tomato paste, onion, and sour cream, served over either rice or pasta. 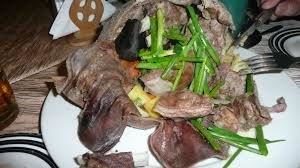 Khorkhog is a barbecue dish native to Mongolian cuisine. This lamb or goat based dish is placed in a container and heated from the inside and out through the use of flaming hot stones and open fire when the heat stones will not be enough. Rarely served in restaurants,perhaps because of the tradition to pass not only the meat, but the hot stones around as well before dining. 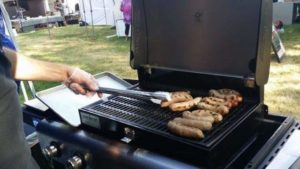 The German Classic! Usually crafted from pork, beef, veal, or any combination of those ingredients, this dish is served across the world with many variations and couplings. Whether eaten at a pub with sauerkraut and potato salad, or snagged from a street vendor between a freshly baked roll, this timeless and boundless dish is a staple of breakfast, lunch, and dinner world wide! 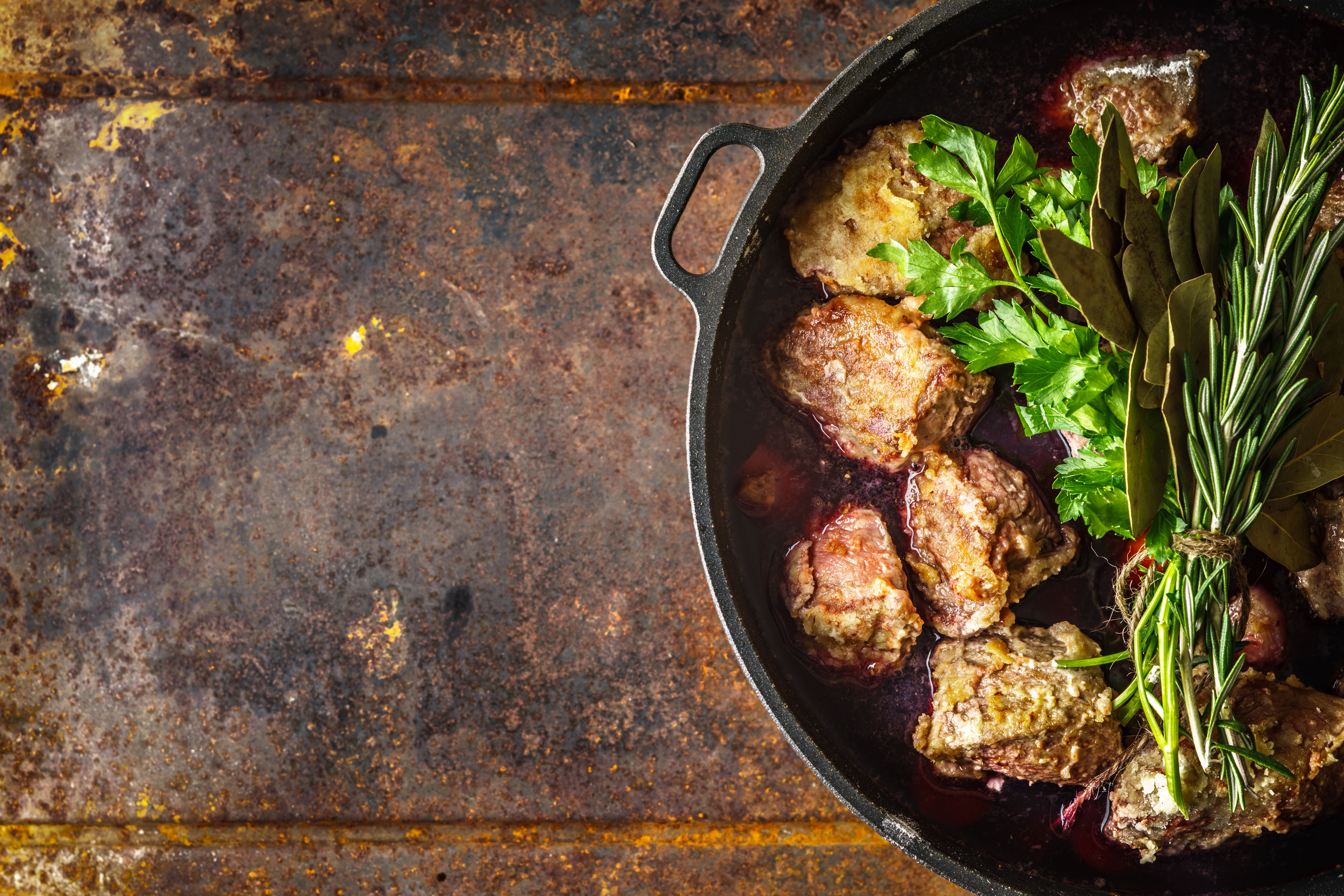 A stew hailing from France, no one knows who created this dish, or when this classic was conceived, however the flavor and prominence of this dish is unquestionable. This beef stew is braised in red wine, often red Burgundy, and beef stock, and generally flavored with carrots, onions, garlic, and a bouquet garni, and garnished with pearl onions, mushrooms, and bacon. It has been touted by some as “the most delicious beef dish concocted by man.” 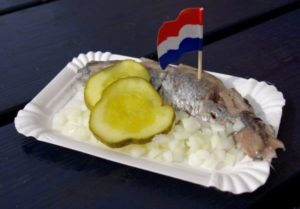 A treasured dish from the middle ages owing its roots to the Dutch process of “gibbing” in which herring have their gills and part of the gullet are removed from the fish, eliminating any bitter taste. Ideally these herring are caught between the middle of May and beginning of July when their oil content is at its richest. The fish is then cured in a barrel for about 5 days to produce the soft texture and salty flavor this dish is renowned for.

Also known simply as “Ragu,” this dish heralds from the city of Bologna in italy, and is a bed of tagliatelle pasta topped with bolognese sauce. The porous and rough texture of the pasta makes it a perfect compliment for the creamy, fatty sauce, and emphasizes fresh ingredients such as onion, celery, carrots, white wine, and tomato. 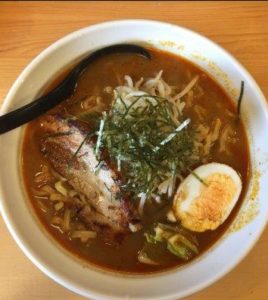 “Chasu” or sliced pork is a popular way to flavor and prepare barbecued pork in Cantonese cuisine. The fatty and rich flavor combines well with both shoyu or miso based broths and is sure to warm your soul and fill your stomach! 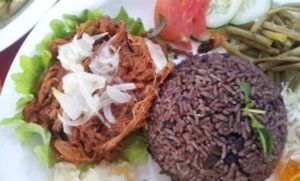 Ropa Vieja is one of the national dishes of cuba but remains popular throughout the entire Carribean. This shredded or pulled beef dish is traditionally served with various vegetables and sweetened through fully ripe bell peppers, however modern versions usually use some amount of sugar to achieve this flavor. 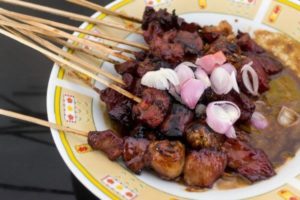 This catch all term for an African open fire barbeque originates from the Zulu dialect and translates literally to “Burn Meat.” Typically flavored through chillies, garlic, onion and more this is a chance for friends and families to get together and share in delicious and traditionally prepared cuts of meat. 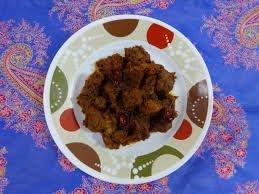 Rendang is an Indonesian spicy meat dish originating from the Minangkabau region in West Sumatra, Indonesia. Typically beef this dish is slow cooked and braised in coconut milk and a traditional spice mixture including ginger, turmeric, nutmeg, pepper, and more. This cooking style also allows for extended preservation of a large amount of meat and its durability has made it a staple in food aid relief. 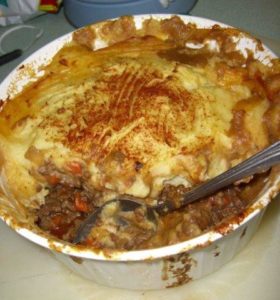 Cottage pie or shepherds pie is a ground meat pie with a crust or topping of mashed potato. While the modern version has countless variations originally this dish is made of simple and flavorful ingredients such as ground red meat, gravy, onions, and the mashed potato topping layer. Vegetables and cheese are a common addition that add variety and texture to an an already flavorful and crunchy dish. 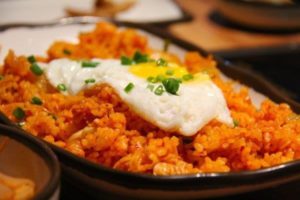 Kimchi Fried Rice is a popular way to fry rice in Korea. Over-ripened Kimchi is preferred when preparing this dish, as the extended fermentation can produce even greater and richer flavor than when it is fresh. Ensuring all the brine has been squeezed out the Kimchi and its fillings such as the radishes and green onions ensures proper texture of the dish and avoids mushiness.

This dish of German origin is made of a thin cut of pan fried and breaded veal. Though the modern designation of Wiener Schnitzel was coined in the early 19th century stories of this dish and its origin date back much farther. Though the exact origin is a mystery, this crunchy and savory dish has been putting smiles on hungry faces for hundreds of years. 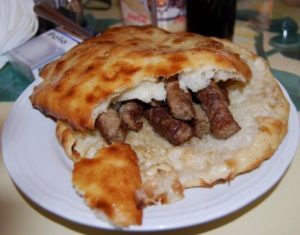 Cevapi is a grilled dish of minced meat found traditionally in the countries of southeast Europe, and is considered the national dish of Bosnia and Croatia. Usually served in groups of 5-10 pieces on a piece of flatbread with chopped onions, sour cream, feta cheese, and more! Formerly food for outlaws, later turned traditional street dish, this dish has a long and storied history along with its simple and delectable flavor 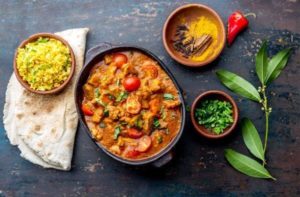 This aromatic curried meat dish of Persian or Kashmiri origin. is made with red meat traditionally lamb or goat and flavored primarily by Alkanet flower or root and Kashmiri chilies. It is one of the signature recipes of Kashmiri Cuisine  Flavored with garlic, ginger and aromatic spices and more this is a punchy and flavorful dish sure to give your tongue a delight. 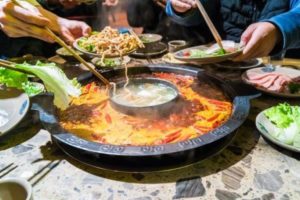 This dish is very popular in the region of Sichuan and Chongqing, but later it has spread all over the country and become favored by the whole china This variation on the traditional Chinese hot pot is sure to awaken a fire in your stomach and warm your soul. The intense heat of Sichuan cuisine and shared nature of the dish ensures that the whole family can get in on the fun and share in the flavor (and pain) together.

This groundnut based stew or sauce is a staple food across Western Africa. Variations often include chicken, onion, tomato, garlic, hot pepper and more. Consistency may vary depending how this dish is served but the savory delicious flavors absorbed deep into the sauce is there to stay. 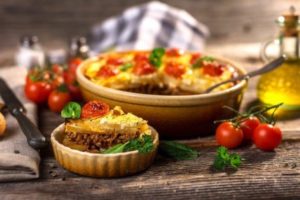 Moussaka is an eggplant- (aubergine) or potato-based dish, often including ground meat, in the Levant, Middle East, and Balkans, with many local and regional variations. Served hot, cold, and everything in between this dish has become a way for many countries to express their individual cuisine through the use of ingredients specific to their area. 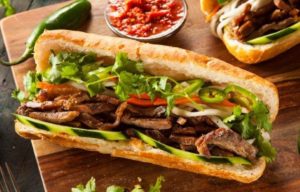 This is actually just the Vietnamese name for bread, but also refers to a sandwich, split lengthwise, and filled with savory ingredients. This mix of meats and vegetables from native Vietnamese cuisine such as chả lụa (pork sausage), coriander leaf (cilantro), cucumber, pickled carrots, and pickled daikon combined with condiments from French cuisine such as pâté, along with chili and mayonnaise make for an intense but not overbearing flavor. 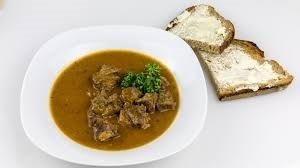 This dish has no exact starting home as many have been eating it since before roman times. Still this combination of ox tail with various other ingredients often including carrots, aromatic herbs tomatoes red wine soffritto of onions, garlic and more. The tender meat of oxtail stewed for hours just falls off the bone and melts in your mouth. 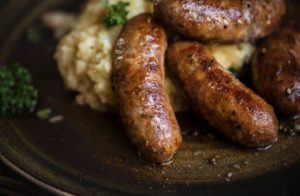 Bangers and mash, also known as sausages and mash, is a traditional dish of Great Britain comprising sausages served with mashed potatoes. It may consist of one of a variety of flavored sausages made of pork, lamb, or beef. With roots tracing back 500 years this dish is usually flavored with common simple spices such as white and black pepper. 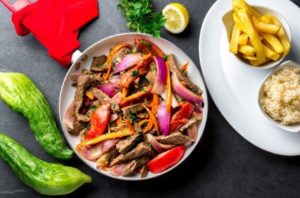 Lomo saltado is a popular, traditional Peruvian dish, a stir fry that typically combines marinated strips of sirloin (or other beef steak) with onions, tomatoes, french fries, and other ingredients; and is typically served with rice. The dish originated as part of the Chifa tradition, the Chinese cuisine of Peru, and has been praised for showing the rich fusion of old and new worlds